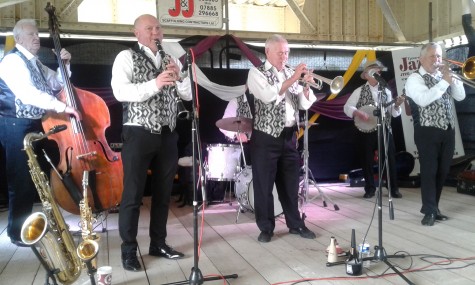 Richard Leach (trombone)
A professional jazz trombonist based in Worcestershire, England. Richard’s various musical activities acknowledge his contribution over the last 50 years of performing on the jazz scene around Europe and the UK.
Arthur Brown/Kevin Grenfell/Tony Pipkin (trumpet)
Having led his own band for many years, trumpeter Arthur Brown joined Pete Allen’s band and then had a spell leading a band in Spain. On his return to the Midlands, he appears regularly throughout the region.
Arthur remains dedicated to the robust buccaneering style of Dixieland.
Chris Pearce/Matt Palmer (clarinet)
Chris Pearce first studied music at Liverpool Cathedral where he was a member of the choir for 5 years. After moving to Welwyn Garden City, he took up the clarinet at this time, then moving to Gloucestershire. Soon afterwards he joined the Riverside Jazzmen with whom he remained for many years. In 1976 he became a member of the Bluenote Jazz Band, based in Bristol, and over the next 26 years enjoyed playing with visiting musicians such as Earl Hines, Wild Bill Davidson, Bud Freeman, Humphrey Lyttleton, Bob Wilber, Kenny Davern and Digby Fairweather, Ruby Braff and Peanut Hucko. Following the sad death and his close friend and leader of the Bluenotes, Roger Bennett, Chris decided to seek pastures new, joining the Antique Six in the autumn of 2006 and the 7 Stars of Jazz early in 2007. Main influences include Simeon, Dodds, Armstrong, Morton, Barber, Brown, Bechet.
Matt Palmer started learning clarinet at the age of fifteen having become a keen jazz fan through listening to his father's records, which included sessions from the 50's and 60's by Chris Barber, Alex Welsh and the Dutch Swing College Band. First experienced playing jazz in 1988, sitting in with a few bands around the Nottingham area. In 1990 he formed the 'Knights of Jazz' who enjoyed a great deal of success in the early 1990's.
Matt's full-time career began in 1995 when he became a member of the resident jazz band at Alton Towers theme park, becoming bandleader in his final season (1997). When the theme park contract came to an end, he formed the Millennium Jazz Band who became firm favourites in several leading jazz venues. During the late 1990s several visits to Puerto de Mogan, Gran Canaria, Matt hosted star-studded jam sessions featuring musicians appearing at the jazz festival held on the island. These sessions have included such notables as the late Kenny Baker and clarinet star Pete Allen. In 2003 Matt was invited to join powerhouse Jump-Jive outfit Hot Banana with pianist Simon Banks, and trombonist Kevin Grenfell, the band’s renditions of Louis Prima classics entertained the passengers making the journey from Plymouth to Santander on the Brittany Ferries Line on a regular basis until 2010. The band continue to appear at festivals and functions around the UK. Birmingham’s famed Eagle Jazz Band called on Matt’s services in 2004, sadly the band disbanded in 2005 after the death of last remaining founder member Tony Hobson. The group soon reformed under the banner of the Millennium Eagle Jazz Band ‘Continuing the Tradition of Hot and Entertaining Jazz’.  Recently the band appear under the banner of Matt Palmer's Eagle Jazz Band. Matt can also be found with several other line-ups including All Star groups that have recently allowed him the opportunity to work with some of the finest UK jazz musicians such as Enrico Tomasso, Tom ‘Spats’ Langham, Melcolm Sked, Tom Kincaid, Amy Roberts, Jim Swinnerton, Amy Roberts, Nick Ward, John Crocker, George Huxley, Denny Illett, Micky Cooke and Geoff Barnhart (USA). Other activities include being Chairman of Nottingham Rhythm Club, the longest running Jazz Club of its kind in the Country, founded in 1941-Still Going Strong!
Ian Parry (banjo)
Terry McGrath/Dave Deakin (sousaphone)
Nick Ward (drums)
A superb drummer who is in constant demand; he is also one of Britain’s finest exponents of vintage style jazz drumming, playing in many UK bands. Recent bands include Keith Nichols, Martin Litton’s Red Hot Peppers, New Century Ragtime Orchestra, Fryer-Barnhart International All Stars. He also deputises with many other bands. Nick has a selection of percussion instruments, including two Premier drum Kits, both dating from the 1930s. The one kit dates from 1934-37, and the other from 1937-1938, plus other individual bass drums, snare drums and Chinese tom toms, and temple blocks, all dating from the 1920s as well as a large collection of cymbals also from this period. He also has a Boosey and Hawkes “New Century” drum console dating from 1934.