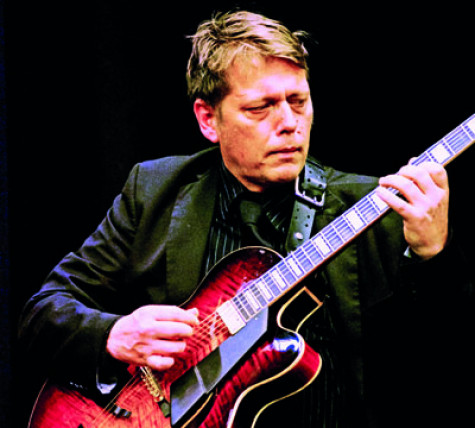 Nigel Price is an award-winning guitarist with a career spanning more than 25 years. He is widely acknowledged as one of the hardest working and sought-after musicians in the business and many gigs feature him as guest musician. Price’s blend of flowing bebop lines, deep blues sensibility and his mastery of chording continue to delight audiences and fellow musicians alike. His career highlights include a support show for Gladys Knight at The Royal Albert Hall and an appearance on Van Morrison’s recent album, Keep Me Singing.

He has played on more than 50 albums including seven as a leader, spent 10 years with acid jazz outfit The Filthy Six, was a member of James Taylor’s band, JTQ, for three years and recorded five albums with them. He toured with various reggae and funk bands before settling on a solo guitar career and turning his attention to jazz. Citing early influences as Wes Montgomery, Joe Pass, John McLaughlin and the Mahavishnu Orchestra, Price honed his craft by attending gigs and sitting in with the players of the time. He has been awarded a Parliamentary Jazz Award (Best Jazz Ensemble, 2010), a nomination for a British Jazz Award (Best Guitarist, 2014) and a British Jazz Award (Best Guitarist, 2016) and is a regular performer at London’s Ronnie Scott’s Jazz Club.

Price is a big Wes Mongtgomery fan and of this recording says, ‘I’ve found his compositions to be great vehicles, especially used in the organ trio format. I couldn’t wish to have a better or more exciting team than Ross Stanley and Joel Barford to help me convey this material. We have some fantastic guests too: long-time collaborator Vasilis Xenopoulos on tenor saxophone, the wonderful Tony Kofi on alto and the legend that is Snowboy on percussion on five of the tracks.’

‘Cariba’ starts the album and is based around a central theme, which Kofi picks up and runs with, creating a delicious extended sax solo, tempered with the guitar which threads its own take through it. The standard construct is given a Price twist and there is some great playing from the ensemble and the interchanges between tenor and alto sax are stand out. By the time the track is fully developed, the listener is fully engaged.

‘Leila’ is fast, compulsive and driven with some excellent solos from organ, guitar and the tenor sax. It has much of the traditional jazz club numbers with solid ensemble work and interesting solo spots shared liberally. All the while, the speed is relentless. The interactions of the ensemble and drums is interesting and a divergent interlude in this time-shifted version of the number.

‘Jingles’ is given a re-vamp and uplift, the rhythms fast paced, Latin infused and punctuated by crazily-motioned percussion which adds all manner of sounds to the layers. ‘Far Wes’ is in waltz rhythm, the timings slowed and sped up to interject change and variety whilst the sax soars over the top in the mid-section. The number feels like a song in its construct and it works well.

‘So Do It’ is an easy going, laid back number with strings weaving their way through the lilting, rolling feel, adding a sense of timelessness and dream-like qualities. ‘Movin’ Along’ is an ambling, rhythmic number with great solo work from guitar and some dynamic interaction between the ensemble who, at various points, take the theme to themselves and deliver their take, not just in the solo sections either; there is much rhythm exploration going on in the backing.

‘Monk’s Shop’ is a recognisable and straightforward tribute to the original song with the sax taking on the rhythm and melodic patterns before the guitar sails away with them, Price enjoying his own interpretation on the original. ‘Road Song’ is a grooving shuffle which moves along and virtually drives itself from beginning to end.

The album feels like a homage to Wes Montgomery but also explores the ‘what-ifs’ which Price had in mind when he considered how Montgomery might have produced the numbers differently on a different day, in a different mood. The tracks are takes on themes rather than complete re-workings and right through there is no sense of a loss of Montgomery in Price’s interpretations. There is also a touch of boogaloo, funk and soul in the music which is because Montgomery’s style influenced a lot of music which followed his passing and Price has no doubt he would have been at the forefront of these genres, so he intertwined some of these styles with Montgomery’s music. It works well due to Price’s careful and respectful arrangements and the fact Price commissioned Callum Au to write three string quartet arrangements and transform some of the pieces into full bodied productions. Price comments, ’I was not prepared for the depth and beauty of Au’s incredible writing, not to mention the wonderful playing form the Phonographic Effect Strings.’ Whether you are familiar or not with Montgomery’s extensive works, listening to the album will give you an essence of the musicianship as well as provoking a sense of exploration. However, all that said, there is a lot of individuality to the interpretations. Price says, ’what started out as a little daydream has become an exciting body of work of which I am very proud. I must say it turned out even better than I imagined.’

Who knows what Wes Montgomery might have made of this? Hopefully, he would have very much approved