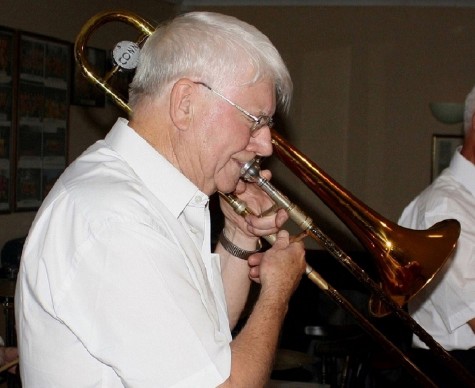 Bob Dwyer (Trombone) - Bob has been playing in Jazz Bands since the 1950s. After a long association with Steve Lane, he became familiar with King Oliver’s music. This proved to be a valuable experience in the art of playing ensemble trombone and arranging for his own Hot 6 and Hot 7 bands, which appeared at jazz clubs and festivals for many years, before launching his Bix & Pieces band around a decade ago and he hasn't looked back.

Graham Collicott (Drums) - was the drummer in the Temperance Seven band
John Bayne (Double Bass & Sousaphone) – John has been a loyal member of Bob Dwyer’s bands...
David Price (Banjo and Guitar) - Left school at seventeen and saw an advertisement in the Melody Maker ‘Engagements Wanted’ - resulted in a call from the Essex Frog Island Jazz Band. I remained with the Frogs for six years, then led a cabaret band called The Celestial Banjo Band culminating in a six-night-night-a-week residency at the Heathrow Skyline Hotel in 1974, followed by a solo cabaret act playing all London’s top hotels. Studied classical guitar, but a broken tendon put an end to that chapter, but I mastered the banjo and got bookings at the likes of South Bank's Purcell Rooms, playing classical, ragtime and jazz. A TV and radio slot helped put my name in the frame. After running The London Music Agency for a few decades and enjoying varied gigs, I rejoined the Frogs until a replacement could be found for Owen Diplock - it seemed I'd never been away and stayed for three years. Now enjoying my jazz with Bob's Bix & Pieces, I still retain my interest in jazz and swing. I also teach banjo and organise an amateur banjo band based in Blackmore, Essex. (If you are interested in joining, please give me a call: 01277 824616 or email dvprice@live.com).

Hugh Crozier (Piano) - Versatile and very experienced, Hugh provides great swinging dixieland jazz of the 1920s/30s, Jelly Roll Morton style of piano playing and is a brilliant exponent of boogie woogie. Hugh joined Bob Dwyer’s Hot Seven in first decade of the new millennium and has stayed with him since.